Főoldal > Solutions > Waterproofing of basements against water under pressure

Waterproofing of basements against water under pressure

I. NATURE OF THE PROBLEM – REQUIREMENTS

Basements of buildings, in order to be useable and viable, require effective protection against moisture and water under pressure. When the underground water level around the basement is above the level of the basement floor, the basement must be prepared as a watertight basin, which will constantly be found in water and will be consistently subjected to hydrostatic pressure.

Such a sealing layer must:

In these cases, waterproofing from the interior of the basement is usually recommended, in order to create a continuous and watertight basin.

It is always of primary importance that the supporting elements are properly designed so that they are able to bear the water’s hydrostatic pressure. The application of AQUAMAT cement-based brushable sealing slurry is recommended since it has the advantage of being applicable to internal walls and basement floor. It forms a strong bond to the substrate and withstands negative pressure from water.

In case of a new building, the addition of PLASTIPROOF waterproofing admixture into concrete during the concreting of the basement’s structural elements, in a proportion of 0,2-0,5% of the cement weight, is recommended.

Finishing – full-formation of the pumping saft
After the waterproofing of the basement is finished, there is no further need to pump out water; therefore, the presence of a pumping saft is no longer necessary. However, it is recommended that the saft is maintained, in order to confront possible future damage to the waterproofing, for example, during later electrical, mechanical, or plumbing work in the basement.

In such cases, if the saft has been maintained, a quick pump-out and immediate lowering of the water table can be done if needed, in order to avoid flooding of the basement and the probable ruin of any valuable items located there.

The saft should extend above the basement floor until the highest observed level of the water table plus a safety margin of at least 50 cm, because according to the principle of communicating vessels, after the pumping-out stops, the water level inside the saft will rise to the same height as the water level around the basement.

In order for the pumping saft to obtain its final form, the following work must be done: 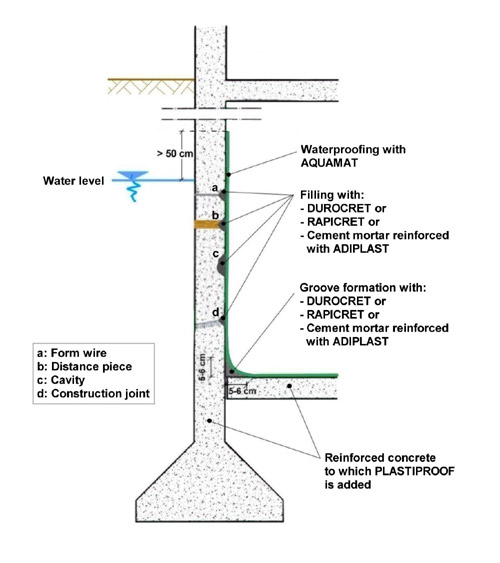 This website uses cookies to improve your experience. We'll assume you're ok with this, but you can opt-out if you wish. Read More

Cookies are small text files that can be used by websites to make a user's experience more efficient. The law states that we can store cookies on your device if they are strictly necessary for the operation of this site. For all other types of cookies we need your permission. This site uses different types of cookies. Some cookies are placed by third party services that appear on our pages.